Taking the Extra Stress Away

But as Santana held her newborn, a nurse heard the baby’s cries and did become concerned.  She took Alizee to the Neonatal Intensive Care Unit and soon there were four nurses back in Santana’s hospital room.  “They told me she was really, really sick. They told me to go to her bedside.  It was pretty scary — I called my mom!” 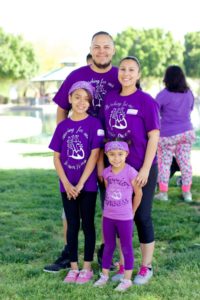 The neonatologist determined that baby Alizee had transposition of the great arteries.  (This is a serious but rare heart defect, in which the two main arteries leaving the heart are reversed.) So hours after giving birth, Santana was researching cardiologists and Alizee was being flown from Yuma to Diamond Children’s Medical Center in Tucson.  Santana and her husband raced there by car.

The cardiologist here stabilized the baby and within a week, she underwent open heart surgery.

“The nurses noticed that my husband and I were sleeping in the hospital and recommended the Ronald McDonald House.  We stayed there over a month and it made it so much easier for us.  We needed to eat, shower, and sleep a little.”

“The Ronald McDonald House really helped us out a lot.  Everyone was so nice and it was really wonderful to have a place to go home to.  It took that extra stress away. ”