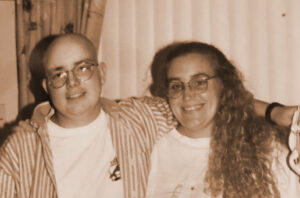 The Rogers: Looking Back

It was 1992 and fifteen-year-old Brian Rogers had been feeling lousy, but according to him, not bad enough to keep him from playing golf and chasing girls. The summer after his freshman year, he left his home in Casa Grande to help his grandparents in Silver Springs, New Mexico. But he was so tired and lethargic, he spent a lot of time sneaking away to take naps.

“I was helping to build a deck and was so tired, I swung a hammer smack into my leg. When I went to lie down (for another nap) I saw this really bad bruise on my leg.” But he didn’t think it was anything unusual.

Fortunately, his maternal grandmother did. She and his mother, Herbie, thought he might have Osgood-Schlatter – a disease that affects kids having growth spurts. Since his grandmother was a lab technician, she ran a blood test and was shocked to learn that Brian had cancer. The diagnosis was confirmed by the doctor she worked for, who wanted to fly him to the closest hospital as soon as possible.

Meanwhile Herbie was on her way to New Mexico to pick him up and knew none of this. (Remember life before cell phones?) A police officer pulled her over to break the news that her teenage son was so sick, he needed to be flown to University Medical Center. As upset as she was, she was clear-headed enough to know that Brian needed his mom with him, so she demanded to drive him there herself.

The drive to Tucson was a blur.

“When we got to the hospital, they were all ready for us,” Herbie said. “Brian’s name was on the door and his labs had been sent. I was so grateful and so terrified at the same time.”

“I still remember it vividly,” Brian said. “They didn’t pull any punches. They told us I had a rare, aggressive form of bone marrow cancer, with about a 30 percent survival rate.” It was Acute Promyelocytic Leukemia, a cancer usually seen in elderly patients.

Treatment started immediately – intense chemotherapy for months. Herbie spent that time sleeping on a pull-out chair in Brian’s room, “living out of the trunk of her car.”

When cold, flu and RSV season hit, Brian’s doctors all but insisted they move to the Ronald McDonald House.

“The doors to the Ronald McDonald House opened. Lisa (the House Manager) was there to welcome us and help us feel at home. I was never happier to see a washer and dryer, ironing board and starch.” (Herbie reminds us it was the ‘90s and people ironed and starched their clothes.)

“At first, I was just excited to get out of the hospital,” Brian said. After that, “the Ronald McDonald House became our second home.”

Herbie stayed at the Ronald McDonald House off and on for nearly a year while Brian was in treatment. Brian stayed there too when he had a break from chemotherapy but couldn’t yet go home.

“We found love and acceptance there,” Herbie said. “There was always someone to wrap their arms around you. To say, come have a cup of tea. And the people we met there made our lives so much richer.”

After 10 months, Brian and his mom were able to go home. He remained in complete isolation, seeing family and friends through a window or if “they scrubbed like they were going into surgery.”

“It was the most stressful time of my life, but I will always rejoice that we found the Ronald McDonald House,” Herbie said. “All these years later, I’m passionate about the House.”

“I have a lot to be thankful for,” Brian said. “I had great doctors and nurses, emotional support from the Ronald McDonald House. And my savior, my mom. I know I could have lost my life and am grateful for every moment I have with my beautiful wife and my twins.”

The Tucson House is known as “the House that Love Built” thanks to over 40 years of community support. When you make a heartfelt gift to Ronald McDonald House Charities of Southern Arizona, you’re helping the next “Rogers Family” stay together when it means the most.