The Jacobys: Grin & Bear Down

The first thing you notice about Leah Jacoby is the energy in her eyes. When she talks about her passions – people, sports, family – she lights up the whole room. Everything about her face lifts. Her smile stretches across from ear to ear. Her eyes widen to an almost comic-book-like degree. Her eyebrows raise to the top of her forehead.

And it’s only then that you notice that most of her hair has fallen out from the chemotherapy treatments.

Leah was 19 years old and a sophomore at the University of Arizona, studying education and playing on the club tennis team, when her back started hurting her. On the day before Valentine’s Day, she went to the doctor for some x-rays and blood tests, then returned to her apartment to start preparing for that weekend’s team trip to Alburquerque to play in a tournament.

When the doctors called, they said she needed to come in to talk about the results. Leah’s said, “I can’t. I have a tennis match this weekend. How about Monday?” The doctors said, no, you need to come in right away.

She called her parents, Kim and Jay, who were back home in Highland Park, Illinois, about an hour north of Chicago. They rushed to get on a flight right away without knowing exactly what was wrong. Her sister, Rachel, was in Malaysia on a Fulbright scholarship and couldn’t make it. By the time they landed, the worst had been confirmed.

Leah had cancer. B cell Lymphoblastic Non-Hodgkin Lymphoma. A 10-centimeter tumor was pressing on her spine and kidneys. It has caused her back to fracture. Her kidneys were failing.

The treatments needed to start right away. Leah needed to withdraw from her classes. What they thought would be a weekend trip for mom and dad turned into 26 days.

For the first few weeks, while Leah was still in the hospital, Kim and Jay stayed at the Ronald McDonald House. Kim says she had “no idea what to expect,” but a support system is exactly what they found.

Thanks to newly upgraded WiFi and computer access, paid for by donor support, both Kim and Jay were able to work remotely. Both Kim and Jay’s employers were very supportive, and every little bit can help.

The whole family was nervous about meals. In a hotel, they would have had to eat every meal out, which can be very expensive, or in Leah’s words, “gross” and “annoying”.  At the Ronald McDonald House, though, volunteer groups come to cook meals every day, and sometimes even twice a day.

At the mention of those meals, Leah’s eyes light up again. Bigger and brighter than ever.

“The food here is really good,” she beams. Kim and Jay would bring her meals in to-go boxes every day, and Leah couldn’t wait for lunch.

After three more weeks in the hospital, Leah was able to be discharged, but she wasn’t well enough to fly home yet. She spent the next week with her family, still at the Ronald McDonald House. 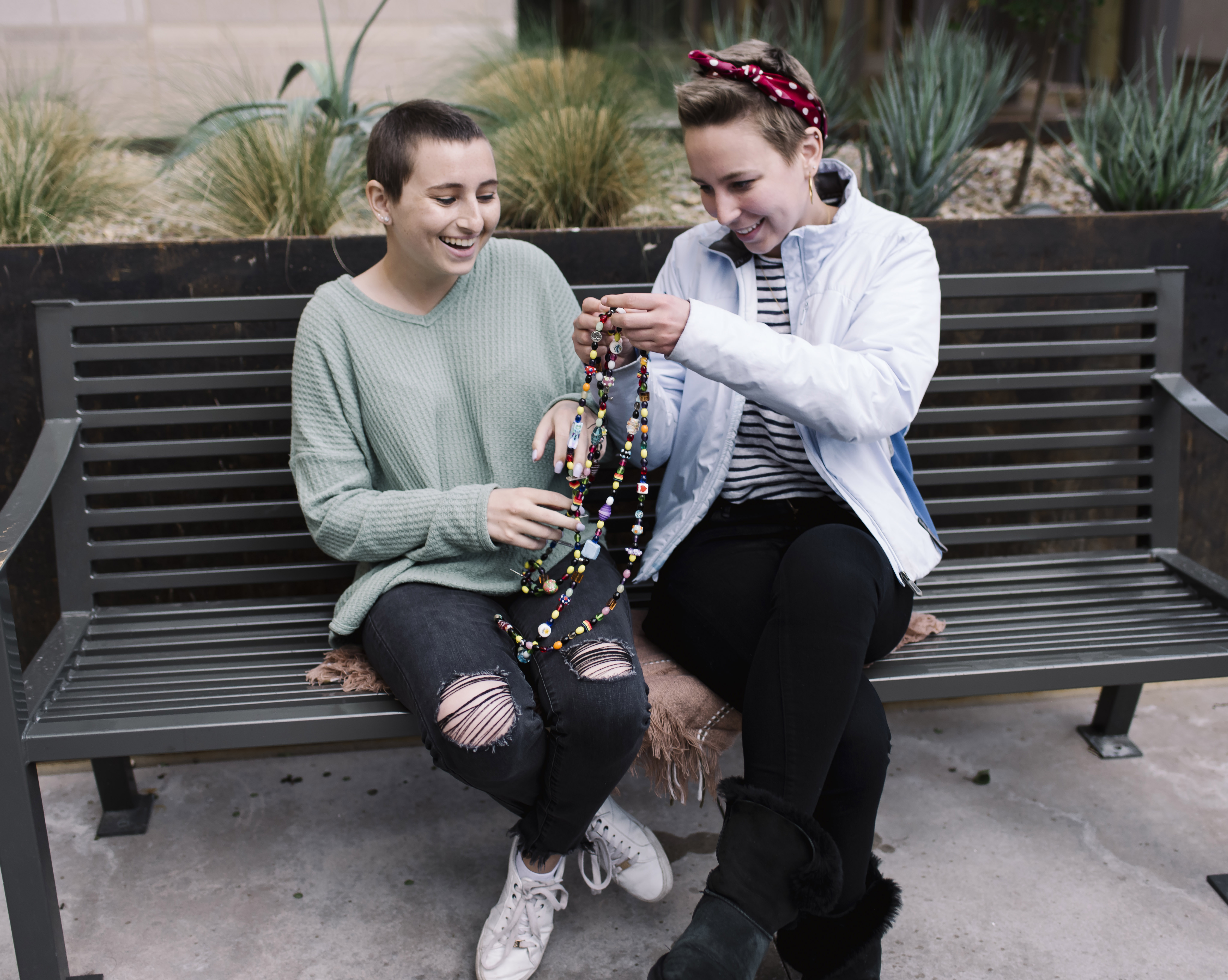 And while she was there, she met Kelsey. Kelsey was also 19. Also from out of state. She was undergoing treatment for what turned out to also be a form of lymphoma. They became fast friends. Leah says, “It was great to have someone there who I could share with. Someone who was my age and going through the same thing. And understood.”

Leah and Kelsey are still good friends and talk all the time. Well, text. SnapChat. Kim and Kelsey’s mom, Glenda, keep in touch too. Out of hardship a new connection was born. Another avenue for support. This type of magic happens every day at the Ronald McDonald House.

And as with all families who stay at the Ronald McDonald House, the story doesn’t end when they go home.

Leah and her family went back to Highland Park. The check-ups and the treatments continued, this time at Lurie Children’s Hospital in downtown Chicago. They often stay at the Ronald McDonald House there when Leah is treated in-patient. Kim and Jay were still anxious all the time – that never goes away for parents of a sick child.

Leah took online classes through the University of Arizona online in hopes that she could eventually return to Tucson, but now she had a new major: nursing.

“Every single nurse I met was so caring. They made me feel so good, and I just wanted to give that same feeling to other kids.”

And so she studied, and slowly felt better. Stronger. This past January, she felt well enough to re-enroll at the University of Arizona main campus in Tucson.

Only weeks after she returned though, so did the cancer. Leah was back in the hospital. Kim and Jay were back in Tucson. More chemotherapy. What made it bearable this time? Leah’s eyes light up again.

“I loved having my sister here!”

Rachel was finally back from her year studying abroad, now living in Washington, DC. She made the trip to Tucson and stayed with the family at the Ronald McDonald House. You can tell from the way she speaks about her how much Leah loves and admires her older sister. And of course, Rachel made friends at the House too. She’s fluent in Spanish and connected with one Spanish-speaking family. Through an app Rachel recommended, they both helped each other to better communicate in a different language.

Leah left for home again in mid-February. Her prognosis is positive but uncertain.

If you are in a position to help, your donation to Ronald McDonald House Charities of Southern Arizona provides a support system for families going through the unimaginable.